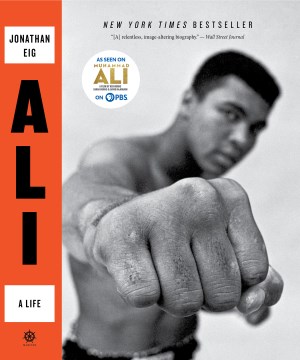 *Starred Review* "Man, it's going to be great to be great." So said Cassius Clay (he had yet to become Muhammad Ali) shortly after winning the heavyweight championship at the Rome Olympics in 1960. In this first full-scale biography of Ali since the fighter's death, in 2016, Eig shows that, finally, after separating myth from reality, after sorting out a lifetime of contradictions, and after detailing the Champ's too-long goodbye from the ring, it really was great being great for the man who called himself "the Greatest." Eig's exhaustively researched account is the first unauthorized biography of Ali, but it joins an already sagging shelf of writing on the fighter who galvanized the antiwar movement when he refused to join the U.S. Army at the height of the Vietnam era. David Remnick's King of the World (1998) remains the best sociocultural analysis of how the gestalt of a nation in the 1960s happened to land on the brown shoulders of a cocky young man from Louisville, but Eig takes the story much further, providing fascinating details on Ali's childhood and, later, on his career as a boxer, both the well-documented triumphs but also the gradual diminution of his skills, which led to the embarrassing last fights and, eventually, to the brain damage and Parkinson's that defined Ali's later years. (Eig even provides a running count of all the punches Ali took in his career, a toll that increased exponentially toward the end.) And yet, after his unsparing recounting of Ali's bad decisions and moments of cruelty to loved ones and opponents, Eig finds enduring humanity in Ali's lighting of the Olympic torch shortly before his death and in his many acts of spontaneous kindness, noting that somehow he had "always remained warm and genuine, a man of sincere feeling and wit." A fine biography of one of the twentieth-century's defining figures.HIGH-DEMAND BACKSTORY: Alive or dead, Ali makes headlines, and this biography will start tongues wagging all over again. Copyright 2017 Booklist Reviews.

In his latest work, Eig (The Birth of the Pill), an unabashed admirer of heavyweight champion Muhammad Ali (1942–2016), takes on the challenge of separating man from myth. This biography touches on and fleshes out legendary tales relating to Ali: the stolen bicycle that led to him to a boxing gym, the Olympic medal he supposedly hurled into the Ohio River, and his statement in opposition of the Vietnam War. Eig skillfully utilizes resources unavailable to previous authors, allowing him to present other aspects of Ali, including his rift with Nation of Islam mentor Malcolm X, his verbal and physical torment of his opponents in the ring, and his extramarital affairs. As a boxer, Ali was a combination of power and grace. Eig, who is working with Ken Burns to develop a documentary on his subject, equals this combination with his blend of research and storytelling. A must-read for Ali fans, followers of the sweet science in general, and those curious about the maelstrom of events that shaped a generation. [See Prepub, Alert, 3/27/17.]—Jim Burns, formerly with Jacksonville P.L., FL

Currently developing a documentary on Muhammad Ali with Ken Burns, New York Times best-selling author Eig based this work on interviews with key people in Ali's life, access to thousands of pages of new FBI and U.S. Department of Justice files, and newly discovered audiotaped interviews from the 1960s. With a 100,000-copy first printing.

Of the many books on Ali recently published, this evenhanded account will likely be one of the most read. Eig () opens with Ali's 1964 fight with Sonny Liston, which would propel a fast-punching and even faster-talking young African-American into the spotlight of a revolutionary era. Rather than focus on boxing highlights, however, Eig broadens his account to include the Clay family heritage, the changing culture of the times, and the long physical decline that silenced the Louisville Lip even as he became a beloved international figure. Eig has produced a thorough overview of a complex person, but he is no boxing authority and his descriptions of bouts and technique are merely adequate. He also offers a rather thin argument that Ali was suffering from pugilistic dementia as early as age 28 (Eig's central exhibit is that Ali spoke more slowly during his comeback). Of course, Ali transcended his profession. Eig industriously traces how a brash kid evolved into a countercultural hero and, in his later years, became a trembling, muted icon. Sharp quotations and expert pacing make the 600-plus pages light on their feet but ultimately Eig's studied equanimity never quite captures exactly why Muhammad Ali was indeed "the Greatest." (Oct.)