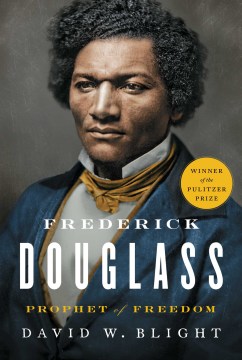 *Starred Review* Any biography of Douglass must compete with his own passionate memoirs, which vividly illustrate the anguish of slavery and testify to the humanity and intelligence of African Americans. Yet, as prizewinning historian Blight (American Oracle, 2011) demonstrates in this brilliant and compassionate work, Douglass could never escape the ingrained racism tainting even abolitionist circles. When he disagreed with "Liberator" William Lloyd Garrison's policy of combating slavery with "suasion," as opposed to outright political activism, Garrison suggested that slaves lacked the sophistication to understand the philosophy of the antislavery cause. A pained Douglass replied, "Who will doubt hereafter the natural inferiority of the Negro, when the great champion of the Negroes' rights thus broadly concedes all that is claimed respecting the Negroes' inferiority?" In Douglass' resistance to the paternalism of white abolitionists, we hear premonitions of Martin Luther King's denunciation of mealymouthed white gradualism. Douglass' support for violent resistance against slave catchers and slave owners prefigures the King versus Malcolm X polarization of the 1960s as well as contemporary debates over radicalism and the Black Lives Matter movement. Blight's Douglass is an unapologetic prophet and radical, and the eloquent voice of this "sacred extremist" has never been more relevant. A must-read. Copyright 2018 Booklist Reviews.

Blight (Class of 1954 Professor of American History and Director, Gilder Lehrman Ctr., Yale Univ.; ) has produced a comprehensive chronicle of Frederick Douglass (1818–95), abolitionist, orator, writer, and diplomat, using an exhaustive survey of existing research, including newspaper articles and family letters. Offering original insights into a man born on a plantation into the slave society of Maryland's Eastern Shore, the author presents Douglass as the oratorical and written voice of a generation who carried the fury and faith of African Americans to three continents throughout his varied public life. Blight also shares how Douglass went on to counsel U.S. presidents such as Ulysses S. Grant. This magnum opus surpasses previous singular biographies in heft and depth, establishing an essential text for students and educators seeking to understand Douglass's complex and expansive narrative. It will appeal to general audiences and specialists alike.

Yale historian Blight's study of runaway slave-turned-abolitionist Frederick Douglass—a "radical patriot" and "prophet of freedom," a "great voice of America's terrible transformation from slavery to freedom"—benefits not only from Blight's decadeslong immersion in the history of American slavery and abolitionism, but also from his access to privately owned sources unavailable to previous scholars. To Blight, Douglass's character and ideology were rife with paradox, and in this huge and meticulously detailed study he unpacks apparent contradictions: Douglass's unexpected happiness as an urban slave in Baltimore; his devotion to his wife, Anna, and their children, whom he rarely saw due to his constant travels as an abolitionist orator; his love for the promise he saw in America and hatred of how slavery had degraded it; his repeated revisions of his autobiographical writings as he reinterpreted his experiences; his second marriage to a white woman, an act both socially transgressive and opposed by his children. The Douglass who emerges from this massive work is not always heroic, or even likable, but Blight illuminates his personal struggles and achievements to emphasize what an extraordinary person he was. Though one might wonder, given Douglass's extensive writings and the numerous works of scholarship discussing him, about the need for yet another biography, it turns out that there was much more to be learned about him. (Oct.)