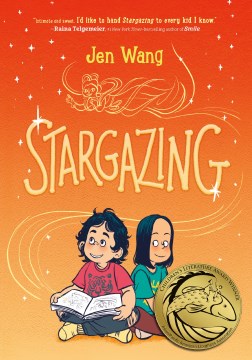 *Starred Review* The author-artist behind the award-winning Prince and the Dressmaker (2018) turns to middle grade in this exceptional friendship story. Initially, Christine isn't so sure about Moon and her mother, who just moved into the extra unit at Christine's family's house. Moon is loud, artistic, and confident, and she doesn't live under the same kind of rules as Christine does in her own Chinese American family. But despite these differences, they're soon spending nearly all their time together. Then trouble arises: Christine feels pressure from her baba to spend more time on her schoolwork than with her new friend, and Moon's popularity with their classmates starts to make Christine feel jealous. But when Moon's artistic thinking turns out to be more than just freewheeling creativity, Christine realizes how important Moon is to her. Wang masterfully communicates the majority of these emotional turns with marvelously expressive faces and body language, rendered in just a few careful brushstrokes. Pien's warm colors add great dimension to Wang's figures, which are refreshingly varied in terms of body shape and size, and Moon and Christine's lively doodles and drawings add playful insight into their characters. Wang tells a story that will ring true to just about any middle-schooler who's dealt with shifting friendships, but her additional insights into navigating differences within the Chinese American community will be a balm to readers in similar situations. Grades 3-6. Copyright 2019 Booklist Reviews.

In Wangâ€™s (The Prince and the Dressmaker, rev. 3/18) middle-grade graphic novel, Christine follows the rules and tries to live up to her strict Chinese-immigrant parentsâ€™ expectations. When a new girlâ€"unconventional, self-confident, uninhibited Moonâ€"and her single mom move into Christineâ€™s familyâ€™s in-law apartment, life gets more interesting: Christine learns some dance moves for the school talent show, lets Moon paint her toenails (her parents disapprove of nail polish), and tries new foods. Cracks appear in the girlsâ€™ close friendshipâ€"especially when Moon and another classmate become friends, causing a jealous Christine to act like not a good friendâ€"until a medical catastrophe befalls Moon. Family and friendship dynamics are portrayed honestly and realistically (Christine standing up to her father: â€œYou want everyone to be perfect! Especially me!â€), but the focus of the story is kept tightly on the two main characters. Panels in a variety of shapes and sizes and a judicious use of white space pace the graphic novel effectively. A natural for fans of Raina Telgemeier, Jennifer L. Holm, and Victoria Jamieson. Martha V. Parravano January/February 2020 p.98 Copyright 2020 Horn Book Magazine Reviews.

This contemporary graphic novel from Wang () thrums with the quiet dramas of friendship and family, and showcases the diversity of the Chinese-American experience. When single mother YuWen Lin and her brash daughter Moon move into the Hongs' extra unit, Christine Hong isn't sure what to make of the new girl, a Buddhist vegetarian who loves to dance to K-pop, settles conflicts with her fists, and even confides that she belongs among the stars. Despite initially dismissing Moon as "not Asian," Christine swiftly discovers a best friend in the girl, who expands her horizons beyond violin, Chinese lessons, American pop, and her more traditional Chinese household. When calamity hurtles into their lives, Christine must scrutinize her conflicted feelings about navigating tensions friendly and familial. Wang's art is as expressive and fluid as ever, ripe with playful detail—from a Jeremy Lin simulacrum named Joseph Chu to generation-bridging references such as Sailor Moon and Pokémon—and the muted color palette, contributed by colorist Lark Pien, casts the book in a nostalgic glow. Plumbing the depths of Wang's childhood for inspiration, this rich, heart-filled narrative will resonate with any reader who has ever felt different within their community. Final art not seen by . Ages 8–12. Agent: Judy Hansen, Hansen Literary Agency. (Sept.)

The year of the dogLin, Grace

Year of the bookCheng, Andrea

Stella Diaz has something to sayDominguez, Angela N.